There was a quiet sense of anticipation waiting for the Governor to introduce his own collection recommended by Ofsted to get an upstanding result for all schools. The hush in the crowded hall was intense as the audience waited for the ‘Gove’s entrance. A sense of excitement as this adored and admired example of flair and style , indeed a veritable dandy of finery and taste kept his audience waiting just the right amount of time before bursting onto the walkway. The drum rolled and the audience rose as one as The Gove strode, to his signature sound of ‘Rule Brittania’, like a behemoth, cloak billowing in the draft of his own not inconsiderable wind, cap at a rakish angle across his fine features and famous profile that defined him as a leader and hero amongst men, yes indeed men and I meant men.

﻿﻿﻿﻿﻿﻿﻿ Women fainted at the mere sight of him and couldn’t wait as he turned at the end of the walkway and postured. Demonstrating a towering example of manhood, he fixed them with a beady eye to inspire terror in the strongest of feminists... not to mention the secret hope that it would be they who were chosen for detention, a chance in a million to spend extra time with him, possibly alone, to gaze in adoration at their secret hero. He switched his cane as he looked around the room, daring anyone to so much as murmur, then, turning on his heel with a smart crack of the whip, he marched with his signature walk back, turned his head briefly to catch any disrespectful sign of lack of focus and concentration, seductively allowing his the gown to slip off his shoulder revealing ,yes the stone washed worn look he so embraced, leather elbows patches on grey tweed. The added touch of chalk dust (dustus chalkamus) lavishly sprinkled (available at all branches of supermarkets and service stations nationally) on his gown rose in clouds of nostalgic delight to cover the audience with an authentic taste of real education.

We knew almost as if by magic that copies of this outfit would be available at all superstores by the following day but who could wear it like the man, our first man upstanding none other than ‘The Gove’. All canes also available sold under the ‘it never did me any harm’ brand of behaviour management resources.

As he returned to the podiun he cracked the cane down and said “good morning”. The whole room responded ‘good morning sir’ and sat down on their chairs. There were inspectors in the room checking everyone was sitting up straight and no-one could speak or go to the toilet at all on such occasions. Of course everyone was expected to go to the toilet before they come in and check reminder flash cards were in the foyer. There is of course always one, “you boy over there...yes you. I mean you, never mind looking round behind you as if you didn’t know who I am talking to” one of the pile of board dusters on the podium like a teetering castle went flying with an astonishing accuracy to the unfortunate man in the middle. Immediately 2 burly inspectors pulled him from his seat by his ear and accompanied him out of the building whilst protesting his innocence.

The Gove stood and respectfully, nay even humbly removed his cap with a flourish and with head bowed and a deep sense of humility he started his speech

“Floreat governa. At last it has begun. A new dawning, a move to uni form our teachers, the children must and so must we , to lead by example,in order to be authentic in the provision of a National Uniform for teachers. There maybe a ‘local’ flourish with eco friendly and organic options but it will be available in all colours and sizes from all leading supermarkets who will be permitted to brand across the front in a tasteful design.They will be assisting my own personal charity at Eton with 50% of the income of course.

Finally we begin our show with optional styles of cloaks, trimmed with fox fur from our specialist hunts which by the way offer apprenticeships for our unfortunate NEETS in the countryside arts. They are shown by example how to vandalise the countryside and trespass onto the property of the poor serfs gardens in search of the pleasure and sport of observing others torture and kill the helpless. We do need these young persons to serve us so this is a good place to start.

Clapping and sounds of ’wicked,man’ were heard on the audience and with a sly smile The Gove felt he had to be seen to silence these words of approbation. A man of charisma and charm, an exploiter of opportunity and a glorious englishman indeed in the best of traditions.

An image appeared on the screen of johny foreigner types clad in leaves around a fire telling stories with a written comment ‘the first teachers.’

“Who did that?” screamed The Gove spittle flying from his furiously distorted lips and showering the fortunate few on the front row with his sacred body fluids. Immediately the image was withdrawn and replaced with the image of an academy with wooden desks and a primary teacher leading a flock of little ones across the yard.

She immediately appeared on the walkway her long skirt swishing at her ankles, beautiful buttoned up boots with a low heel for suitablity of walking in the winter weather. The skirt in a brown worsted material hung at her ankles for the sake of modesty. The pretty khaki coloured shirt was frilled (first class only otherwise no frills version) and buttoned up at the neck with a nice brooch with our motto floreat governa in a lovely times new roman font, no detail was spared.

Polite clapping was heard as she walked humbly, head bowed in awe to the end of the walkway and back. 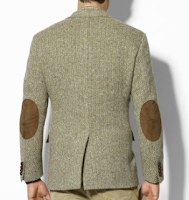 “Retro bro” was the whisper around the room. The men following all had the tweed jacket and brogues of different shade and hue but it was the cap and gown that was to be the highlight of the show as all swept down together following their adored master and clapping in a genteel fashion as The Gove took his bow to an upstanding and outstanding audience. The encores went on for 10 minutes at least. 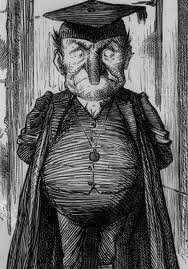 Then suddenly a terrible cackling was heard and a shadowy figure in black appeared with a pointed hat and a cat on her shoulder. A shout went up “A special vote of thanks for The Gove from women all over the world we have chosen a magical representation of the French Revolution for the finale.” The curtain went back to reveal a backdrop of the Bastille.The Gove, not wishing to appear as a bad sport, was led back to the waiting guillotine. Next to this apparently shiny object was a basket and women waiting, knitting needles at the ready for the next seasons line in knitwear.(or would that be knithair, or nit hair?)

“Rest your head here, it is very comfortble and has an apprentice here from your famous vocational courses, the 9 week apprenticeship. I would like to invite all ex members of Eton college 6th form and indeed not to exclude those ‘poor’ people who have similar intentions and ways to take part in this little tableau we have put on for your delectation”.

The room darkened and with a mighty crash of thunder and for good measure a bolt of lightening the guillotine dropped and the cheery smile of the Gove was seen for the last time. Fortunately the curtains were closed before the audience realised the embarrassing mistake, using authentic examples may not always be the best idea.

The cackle became manic and the last to be seen of the shadowy figure was her silouette as she disappeared on her broomstick.

Teacher styles back to basics.
Posted by A Quiet Place at 15:08